“We are very honoured and glad to sign today this agreement with Ermed Georgia LTD, a major player in healthcare services covering the whole region. Our involvement will surely contribute in consolidating Ermed Georgia LTD as the undisputed market leader in this sector of activity”, said Fady Asly Chairman of Channel Georgia Consulting.

“It is an honour and privilege for us to sign this agreement with Channel Georgia Consulting, the highly experienced International Consultancy Firm that kindly agreed to assist and support us in our business activities in Georgia for strengthening our relations with local partners and clients. We believe that this cooperation will benefit to our combined management and dedicated service to ensure that people in Georgia live full and healthy life”, said Mert Calikusu Director of Ermed Georgia LTD.

➢ Ermed Georgia LTD is the official partner and representative of the well-known Global companies: ABBOTT, TURKLAB, SYNLAB, DIRUI, KROS in Georgia and the distributor for their In Vitro Diagnostic Equipment, Products and Services, building its activities with dedication, innovation and trust to serve in healthcare management, solution and services to fulfil the needs of Georgian healthcare market. Through its commitment for establishing better healthcare management in Georgia, Ermed Georgia LTD continues to make steady advances in new diagnostic companies that will bring more accurate and reliable laboratory tests for the health and wellbeing of people. Being dedicated to advance leading-edge technology and healthcare management that hold the potential for significant improvements to health and to the practice of healthcare, Ermed Georgia LTD endeavours to earn the trust of those it serves by committing to the highest standards of quality, excellence in personal relationships, and behaviour characterized by honesty, fairness and integrity.

The signing ceremony was hosted by the International Chamber of Commerce ICC-Georgia.

The World Bank ranks Georgia  the 9th state in its Ease of Doing Business list. Countries whose economies were mostly run by the state for a long period rarely rank so high on this list, which only proves that Georgia is developing in a very fast manner.

One of the strongest features that keep foreign investors coming is Georgia’s protection of investors policy, which guarantees security to investors and their assets.

In this article, we will discuss the top business industries beneficially invested by the foreign investors:

The real estate industry is considered to be one of the major contributors to the economy of Georgia and it is still growing.

Foreign investors can participate in real estate industry many different ways: you may invest in constructions, be a real estate agent or have a rental business.

The bottom line is that in whichever way you intend coming in to the industry, you stand the chance of making huge profits.

Lastly, it’s also need to be noted, that new liberal legislation is on the way, that will make it even more encouraging for entrepreneurs to setup their own businesses.

Georgia is a gateway to many countries and it has some UNESCO approved tourism sites, sea, mountains and modern cities all together mixed in attractive places for the foreign tourists.

If you are interested in the tourism industry in Georgia, then you should consider starting different touristic businesses, you can: Operate a 3 star hotel, create consultancy firm in tourism, offer different trips throughout the region and etc.

All you need to do is to get some certifications and training in tourism before establishing your own tourism consultancy company.

Hydropower is the cheapest and most environmentally friendly source of electricity in Georgia.

The hydroelectric sector has been privatized, but still, Georgia seems to lack adequate policies to maximize the utilization of hydroelectric plants.

New plants will help Georgia, which is already almost self-sufficient in energy, to meet its power needs in winter and allow it to export electricity through a transmission line; therefore, this is a very interesting sector to invest in Georgia.

Georgia’s energy sector is one of the country’s most attractive investment opportunities. Georgia’s electricity generation has not kept up with growing consumption since 2012. Meanwhile, average electricity price are surging.

Georgia was once a top energy producer 20,000 barrels/day, but inappropriate leadership and lack of political will, especially during its Soviet days, Georgia decreased its production of oil tremendously.

Investors are also very interested in taking over parts of this sector, especially because they are now willing to deal with the complex geological formations in Georgia and are ready to conduct drill experiments.

Georgia hopes to make use of its vast agricultural potential since it is one of the strongest sectors Georgia has.

How serious they are is also indicated by incentives that investors will receive for agricultural investments.

The agriculture sector in Georgia is notable for the cultivation of crops like nuts, tea, fruits, apples, etc.

What ranks very high for increased export is wine production. Georgia also wants to increase meat production on its soil in order to launch it in international markets.

Georgia’s oil and gas pipelines, Black Sea ports, well-developed railway system, together with its airports are playing an increasingly important role in linking East and West.

At the same time, Georgia functions as the vertical North-South transportation link between Russia and Turkey and, via Armenia, to Iran.

Thanks to its geographical position, and an inherited modern transportation system from the Soviet days, Georgia shows great potential to be one of the main routes for Asian-European trades and exchange of goods.

Many investors see an opportunity for profit since the trade between Asia and Europe keeps growing.

Also have a look on our article about the reasons, why to invest in Georgia?

Mr. Fady Asly Chairman of Channel Georgia Consulting was re-elected Chairman of the International Chamber of Commerce in Georgia

Fady Asly – guest speaker at the Leadership School, an institution that includes young leaders from both Georgia and Armenia.

Fady Asly, Chairman of Channel Georgia Consulting and Chairman of the International Chamber of Commerce in Georgia was a guest speaker at the Leadership School, an institution that includes young leaders from both Georgia and Armenia.
In his presentation Mr. Asly covered extensively the requirements that characterise true leaders and that include among other things courage, integrity and compassion.

Meeting – The Coalition for Independent and Transparent Judiciary

Chairman of ICC-Georgia and of Channel Georgia Consulting Mr. Fady Asly, held a meeting at ICC offices with the leaders of The Coalition for Independent and Transparent Judiciary
The meeting covered the major problems within the Judiciary and the importance of solving those problems constructively through engaging the various stakeholders, and through the building of trust.

Channel Georgia Consulting is glad to announce that Mr. George Arveladze has joined the Firm as partner for Healthcare and Pharmaceuticals.

Prior to joining GHG, George was the CEO of Liberty Bank, Georgia’s 3rd largest retail bank with more than 5,300 employees and over 650 branches throughout the country, which he led since 2013 delivering c.200% net profit cumulative annual growth in 2 years, an impressive and strong performance. Prior to his appointment as CEO, George served as Deputy CEO in charge of Strategic Projects, Treasury and Private Banking (2009-2011 years) and Deputy CEO, Chief Operating Officer (2011-2013 years). Before returning to Georgia in 2009, he worked in structured product sales at BNP Paribas in London; prior that, he worked at the National Bank of Georgia.
George holds a BBA from Midwestern State University, USA and an MBA from London Business School.

“I am delighted to join Channel Georgia Consulting as a partner, with such a platform and such a highly experienced team of professionals, the Firm will be highlighting Georgia’s presence on the institutional investors’ map. It is my great pleasure to bring international investors on board and contribute to Georgia’s economic growth.” said George Arveladze.

“We are very proud to have been chosen by Fine Hygienic Papers, the largest company of its kind in the MENA region and one of the largest in the world; this Agreement is an additional achievement for Channel Georgia Consulting the leading Consulting Firm that bridges the countries of the Gulf Cooperation Council and the Middle East with the Caucasus, Central Asia and Eastern Europe” said Fady Asly, Chairman of Channel Georgia Consulting.

“We are delighted to be partnering with a renowned international consultancy firm like Channel Georgia to serve new markets in Eastern Europe. This step comes to further highlight the leading position of Fine in providing innovative and high quality hygienic products,” said Charbel Azzi, Chief Commercial of B2B and Export for Fine Hygienic Holding.

Azzi pointed out that Fine’s paper and diaper products are available in more than 70 countries across the Middle East, Africa, Europe and the United States, and that the group is working to expand its business into new markets in the near future.

ICC-Georgia held its 1st Consultative Board Meeting for 2018

The International Chamber of Commerce (ICC-Georgia) held its 1st Consultative Board Meeting for 2018 at Biltmore Hotel on 26 March 2018. Mr. Fady Asly, Chairman of ICC Georgia welcomed the attendees and made introductory remarks regarding the current state of the Judiciary in the country. H.E. Thea Tsulukiani, Minister of Justice of Georgia overviewed the reforms implemented by the Ministry of Justice and discussed the judiciary reforms. The presentation was followed by an open discussion between the Consultative Board members and ICC Georgia members. During the meeting, the 11th edition of “ICCOMMERCE” magazine was released.

The ICC Consultative Board is the only body of its kind in Georgia, consisting of ten ambassadors, the Heads of three major international financial institutions, and the Heads of two major international organizations. The issues raised during the Board Meeting are subsequently advocated to the government through a multi-pronged approach by the ICC stakeholders to affect positive changes in the business and investment climate.

ICC Georgia is the largest and most vocal global Business Association in the country; it includes over 350 corporate and youth members and 28 business associations. The International Chamber of Commerce is the largest business organization in the world that includes over 6.5 million businesses and chambers of commerce. ICC consults regularly at the global level with the G8, G20, the World Bank, WTO, WCO and the UN. 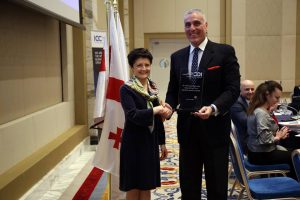 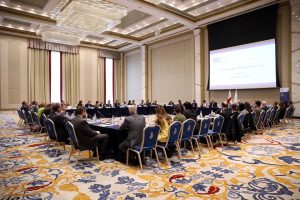 Fady Asly: Investment climate in Georgia is one of the best in the world

The government of Georgia expressed strong  support for further investments from the GCC into Georgia, – it has been noted at the meeting of Fady Asly Chairman of Channel Georgia Consulting and Giorgi Kvirikashvili Prime Minister of Georgia, held on March 21, 2018.

Asly briefed the Prime Minister of the activities of Channel Georgia Consulting in the GCC countries and of the Firm’s immediate plans to expand its presence in additional countries of the Gulf Cooperation Council.

“We had a very good meeting with the Prime Minister regarding investments from the GCC, we are thrilled to get his continuous support to facilitate investments from the countries of the Gulf Cooperation Council into Georgia. The country’s investment climate is one of the best in the world and the government is working hard to improve it even further every day”, – Georgia offers amazing opportunities for investors said Chairman Asly.

Mr. Asly briefed the Prime Minister of the activities of Channel Georgia Consulting in the GCC countries and of the Firm’s immediate plans to expand its presence in additional countries of the Gulf Cooperation Council.

Mr. Asly informed as well Prime Minister Kvirikashvili of the appointment of Mr. Krish Sundaresan as Vice-Chairman of the Board of the Firm.

Prime Minister Kvirikashvili expressed his great interest in the activities of Channel Georgia Consulting in the Arab world and expressed the full support of the Government to facilitate further investments from the GCC into Georgia.

“ We had a very good meeting with the Prime Minister regarding investments from the GCC, we are thrilled to get his continuous support to facilitate investments from the countries of the Gulf Cooperation Council into Georgia. The country’s investment climate is one of the best in the world and the government is working hard to improve it even further every day” Georgia offers amazing opportunities for investors said Chairman Asly.